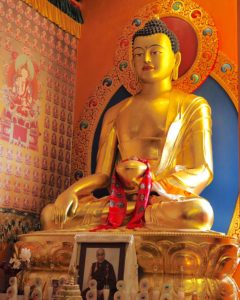 What would happen if

These questions seem especially pertinent in today’s often chaotic and oppositional world, but the fact is that the Buddha gave teachings on similar issues over 2500 years ago.

Shakyamuni Buddha (the historical Buddha) sat under a bodhi tree and vowed not to arise until he’d attained Enlightenment (a state of perfect Wisdom, combined with infinite Compassion).  For most of us, that feels like an impossible task, an unreachable destination.

As in any great journey in life, it begins with just a few first steps and slowly, slowly the terrain changes, the mind unwinds and we become accustomed to the process.

Orgyen Dorje Den is a Tibetan Buddhist center in the Nyingma tradition, founded by the Venerable Gyatrul Rinpoche under the auspices of His Holiness Dudjom Rinpoche. ODD was established to facilitate the study and practice of Tibetan Buddhism in the San Francisco Bay Area. ODD’s current center in Alameda was acquired in 2001 and has since blossomed into an extraordinary resource and support for the Buddhadharma.

Tibetan Buddhism is a vibrant, living tradition with tremendous potential to bring great benefit to every sentient being. These teachings have a long and rich history and are as pertinent as ever in today’s world. The teachings and rituals can be learned, practiced and passed down to a new generation of students who will ensure the future of Buddhism in the West. Orgyen Dorje Den provides the place and opportunity for this to happen.

Classes are a great way to meet us and ask questions. Taught by our senior students or lamas, our classes are open to the public unless otherwise stated.

Come to a Puja

On the 10th and 25th days of the Lunar calendar, the sangha gathers to renew our samaya commitments through meditation on Guru Rinpoche and Dakini Yeshe Tsogyal. All are welcome to join these practices from the Dudjom Tersar. Please bring food or drink to share.

One of the great benefits of volunteering for a Buddhist Center is that you can further your own spiritual development while simultaneously promoting the spread of peace and compassion in the world.

How Can I Help?